Wellington Police are urging motorists not to drive impaired, after a number of people were found driving under the influence of alcohol.

Since November, Wellington District Police has tested over 34,700 drivers for alcohol, with more than 200 drivers processed for driving with excess breath alcohol.

"This is an alarmingly high number and Police are concerned that people are putting themselves and others at risk" says Wellington District Road Policing Manager, Inspector Derek Orchard.

"For every 175 vehicles we stop, one driver tested excess for breath alcohol.

No one should ever get behind a wheel when they are impaired by drugs or alcohol, and no one should get in a vehicle with a driver who is in that state either.

It's not worth risking your life."

This weekend alone, Wellington District Road Policing apprehended 26 impaired drivers. When you're making your plans for going out, make sure they include how you're getting home.

Be realistic – if you think you may end up drinking, don't drive.
It is that simple.

Plan ahead and get a ride from your family or mates, catch a bus, share a cab with friends, or nominate a sober driver for the night.

Getting home safely is more important than worrying about a cab fare.

Wellington District Police will continue to be out in force on our roads to ensure everyone gets the message about road safety.

At 10:05 am on the 10th of the 5th, New Zealand Police is launching 105 ("ten five"), the eagerly anticipated number for the public to report non-emergency situations to Police.

"More than 60 years on from the first 111 call, the launch of 105 today is a milestone for New Zealand Police, offering a new way for people to connect with us," says Commissioner of Police Mike Bush.

"The 105 number and our online platform - 105.police.govt.nz (link is external) - will make it easier for the public to engage with us for non-emergency help, advice and support."

105 is a national non-emergency number that will be answered 24/7 by highly trained Police staff. It is free to call from all landline and mobile numbers.

"Introducing 105 is part of our drive to modernise the way we deliver services to the public and ensure everyone in New Zealand can access policing services – anywhere, anytime," says Commissioner Bush.

"We want people to use 105 to report non-emergency situations. For example, if your car has been stolen, your property has been damaged, or you want to give Police information about crime in your area; use 105.

"111, on the other hand, should still be called immediately if a crime is taking place or there’s a threat to life or property. It’s the number you use to connect with Police, Fire and Emergency, and the ambulance services."

As well as by phone, people can go online to the 105 website to report certain non-emergency situations, and get updates on or add more information to their existing reports. Currently, lost property, intentional property damage, shoplifting, general theft, and theft from a car can be reported at 105.police.govt.nz (link is external).

"We’re encouraging people to report non-emergencies online when and if they can," says Commissioner Bush.

Commissioner Bush says Police has planned for an increase in non-emergency calls with the introduction of 105.

"We’ll launch our marketing campaign - including a jingle designed to guarantee 105 is a number you’ll never forget - once we are sure we understand the demand which has been generated from the public education campaign."

Video and imagery for media use

Why is Police introducing a non-emergency number?

NZ Police is modernising the way it delivers services to the public so that everyone in New Zealand can access policing services – anywhere, anytime. To do this we need to deliver the right service to the public in the right way, enabled by modern technologies. NZ Police is introducing a new, easy-to-remember number – 105 – for reporting non-emergencies. 111 remains the number to call to report an emergency to Police, Fire and Emergency, or ambulance services. The 105 non-emergency number is for reporting situations to Police that don’t require immediate police attendance.

What situations is 105 for?

You can use 105 to report non-emergency situations, such as when your car has been stolen, your property has been damaged, or you want to give police information about crime in your area. The key message is that if it’s happening now or just happened and there’s a threat to life or property, call 111; if it’s already happened and there’s no immediate danger, call 105.

What does Police expect will happen to emergency and non-emergency call volumes and response times?

105 is a national non-emergency number that will be answered 24/7 by Police. The call taker will work to resolve the matter, which might include putting the caller through to their local station. Both 111 for emergencies and 105 for non-emergencies are staffed with highly trained people who can help callers with their specific issues.

What other ways can people report non-emergency situations to Police?

You can also go online (using https://105.police.govt.nz (link is external)) to report certain types of non-emergencies. These currently include: lost property, intentional property damage, shoplifting, general theft, and theft from a vehicle. Police encourages people reporting these types of events to go online in the first instance. You can also go online www.police.govt.nz (link is external) for general advice and queries.

Is there a text based 105 service available?

No, a text based service is currently not available. Please call 105 to talk to Police for non-emergency matters.

Will I be able to call 105 from messaging apps such as ‘Skype’ or ‘WhatsApp’?

No, computer and mobile apps are typically internationally managed and operated. It is unlikely you will be able to contact 105 from apps to talk to Police for non-emergency matters.

Will I be able to call 105 from an internet or overseas-based phone system?

No, internet-based or international-based phone systems will not dial out to 105. Depending on which country and phone system you are calling from, you will be able to call +64 9105 105 for non-emergency matters, however you may incur international toll charges.

We would like to say a huge thank you to everyone who voted for us during May for Z Tawa's Good in the Hood campaign. Thanks to your votes, we received $989.77! This funding will go into our operational budget to keep us on the road and ensure we keep doing Good in our Hood!

This year's Tawa Community Civic Awards took place in the Tawa College staffroom on Thursday 7 June. We're pleased to announce that our patrol received one of the awards that evening. It was accepted on our behalf by TCP Trustee & Patroller Brett Gillies.

Our citation reads: "The Tawa Community Patrol currently consists of more than 40 unpaid volunteers who have gone through a training programme prior to undertaking twice-weekly night patrols of the whole Tawa area. They now carry out daytime patrols as well. Their aim is to detect and curb vandalism, graffiti tagging and other potential problems, preferably before the damage is done or crime committed. In a nutshell, their role as a volunteer organisation is to help make Tawa a safer community by acting as an extra set of eyes and ears for the New Zealand Police. The patrol has been in operation in Tawa for ten years and has the support of both the Wellington City Council and the Police. It has very much proved its effectiveness during this time."

Also receiving an award at the same ceremony were two of our own members - Robert Tredger & Mal Fyfe - for their extensive service to the community of Tawa. 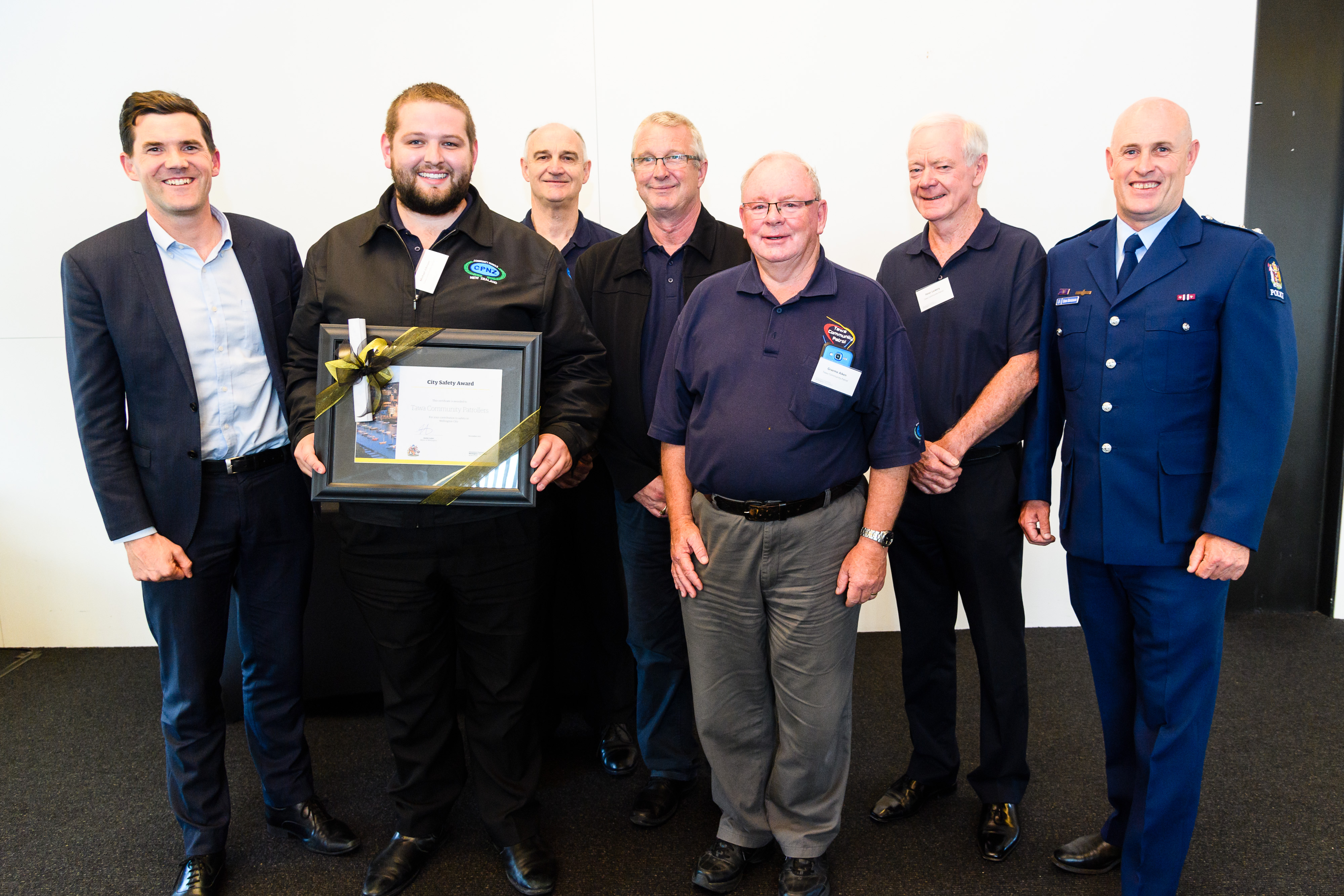 The 40 or so volunteers who work for Tawa Community Patrol have had a busy 12 months.

They sprang into action after the November 2016 earthquake, getting about the suburb to offer reassurance and assistance. The following day there was a major storm that brought down a tree on the main road. The patrol was out again, offering assistance and freeing up the fire brigade to attend to other pressing matters.

The Patrol volunteers work on a roster basis, generally a minimum of three or four hours a month, acting as the eyes and ears of the community.

They provided excellent service in August-September, working with the Police to assure residents after a crime spree in Linden has caused unease. There was a spate of burglaries, car thefts and wilful damage and the Patrol worked nine days in a row in morning, afternoon and night sessions to instil confidence in residents that authorities were organised and looking after them.

On Friday 23 June 2017, we enjoyed the company of former New Zealand Police Association President, now Labour party candidate for Ohariu, Greg O'Connor. Greg came on a ride-along with our active patrols on the night. 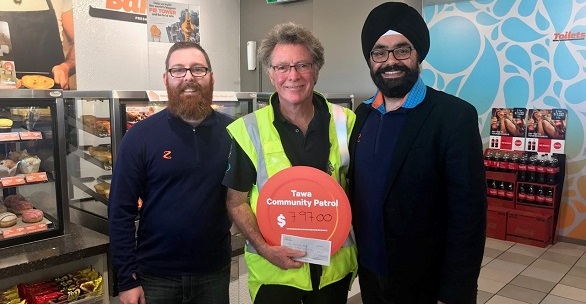 Thanks to all your support at Z Tawa during May, we received a total of $797.00 through Z Energy's Good in the Hood campaign. This funding will ensure we keep doing good in our hood, and keeping Tawa a safe community! 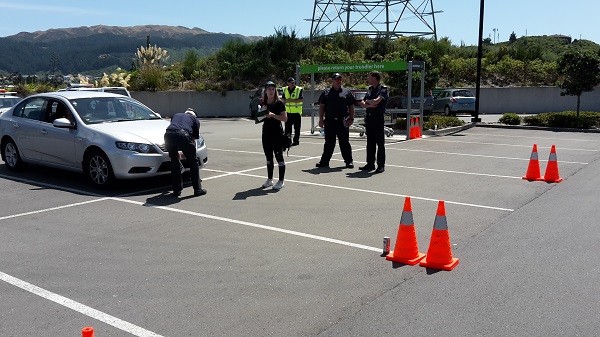 The Tawa Community Patrol wishes to thank all those who supported us during our Safer Plates change over event, held at Countdown Tawa on Saturday 13 February 2016.

Together with the assistance of Wellington District Police, Wellington City Council, Tawa Volunteer Fire Brigade and Safekids Aotearoa, we fitted tamper resistant screws to over 154 vehicles to prevent theft. This raised a total of $1,125.20 which will go directly into our patrol car replacement fund.

Due to the success of this event, we are looking at further change over days in the future as part of fundraising towards the purchase of a new patrol car.

The Tawa Community Patrol would also like to thank Countdown Tawa, Harcourts Tawa, Henshaw Signs, and PrintLink for their support during this campaign. 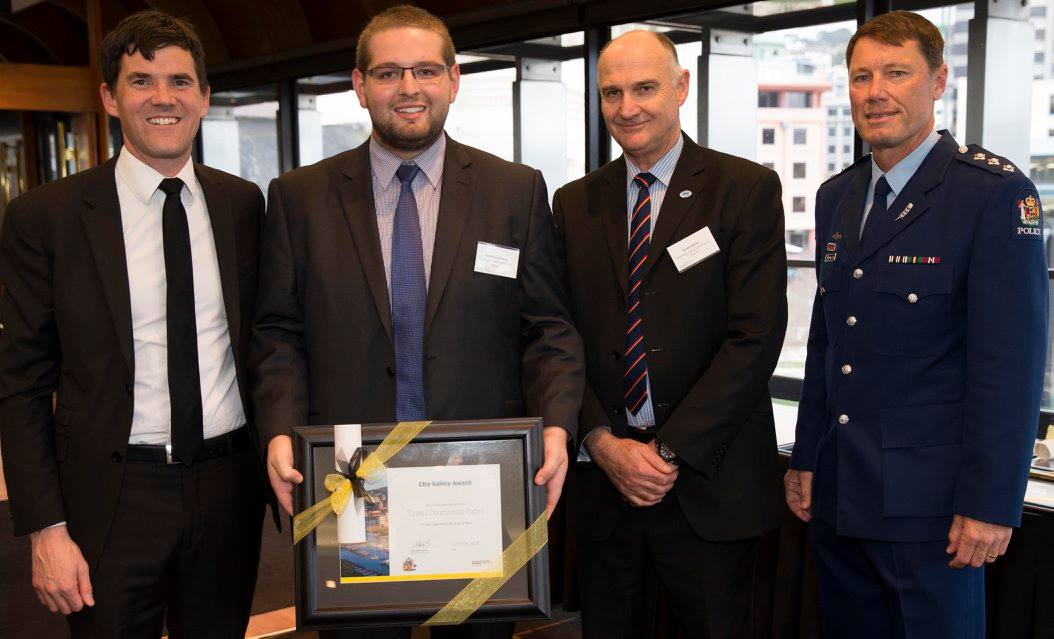 On Thursday 1 October 2015, The Tawa Community Patrol won a Safety in the City Award for our response to the severe flooding in May 2015. This is a real credit to the patrollers involved and the patrol overall.

On May 14 this year, areas of Wellington experienced the heaviest hourly rainfall in more than 50 years, resulting in widespread flooding and damage. During this time, the Tawa Community Patrol group flew into action doing what they could to help those in danger.

Michael Johnson, Allan Johnson and Darryl Smith of the Tawa Community Patrol group left work early and got in the patrol car to go around shops on Main Road and in the Linden area, making sure that residents were okay and helping out where required. They acted with selfless disregard for their own need, for the good of their community.

They also went to the Takapu Valley area which was badly hit and offered support to motorists and residents. In the evening, they patrolled Tawa's streets to make sure pothole lids had not been raised in the flood water, creating hazards.

In the successive days after the worst of the flooding had subsided, two patrollers [Graeme Aiken and Mal Fyfe] again went around Tawa shops to see if any additional assistance was required from the patrol.

When their community was in need, the Tawa Community Patrollers were there, ready to help. They were visible, they were helpful and they were full of initiative. Thank you patrollers. 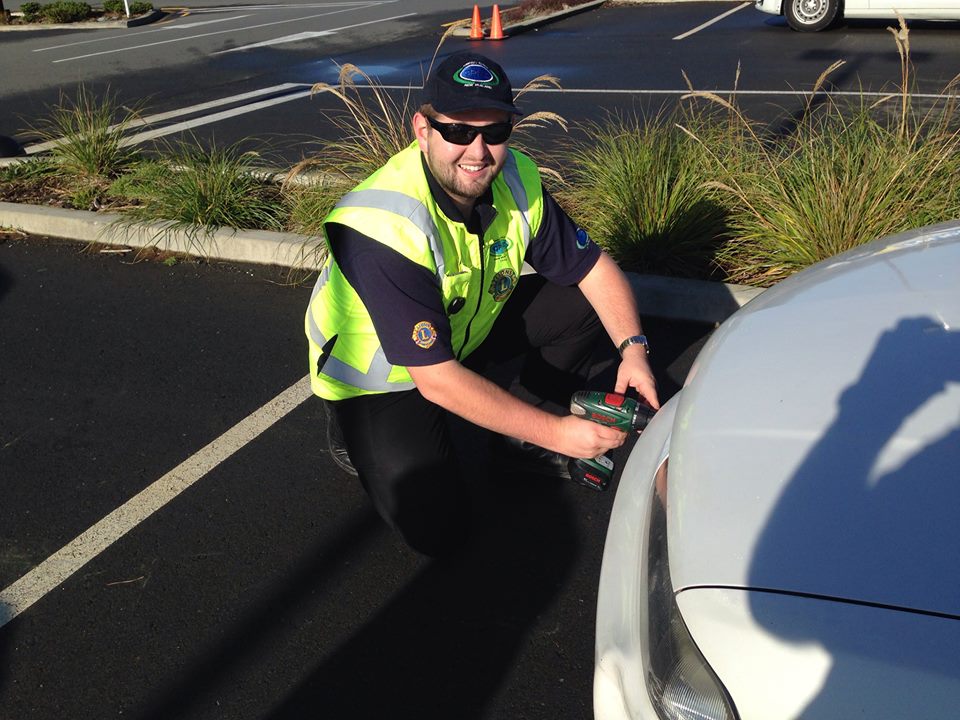 The Tawa Community Patrol wishes to thank all those who supported us during our Safer Plates change over event, held at Countdown Tawa on Saturday 13 June 2015.

Together with the assistance of Porirua Police, we fitted tamper resistant screws to over 97 number plates to prevent theft. The number of plates we changed tripled from our February event, where we changed 34.

Due to the success of this event, we are looking at further change over days in the future as part of fundraising towards the purchase of a new patrol car.

The Tawa Community Patrol would also like to thank Porirua Police, Countdown Tawa, Harcourts Tawa, Henshaw Signs, and PrintLink for their support during this campaign.